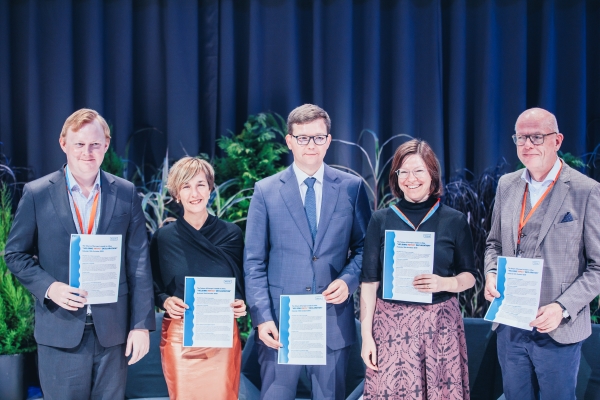 Helsinki invited other cities and collaboration partners to take systemic and rapid actions in solving global challenges. The joint declaration was signed on 10 October 2019 in Helsinki as a conclusion to the Helsinki Impact Conference.

During the two-day conference, policy makers, urban planners and researchers of the cities discussed the role of the cities in the future.

As a result of the conference, the leaders of Helsinki, Stockholm and Tallinn, as well as the European collaboration networks for cities and metropolitan areas EUROCITIES and METREX signed a declaration, in which they commit to advancing a solution to global challenges.

“The cooperation between cities and learning from each other is indispensable, when we want to find solutions to burning issues. The pace both in the climate actions and in the construction of socially equitable cities must be stepped up from what it has been thus far”, emphasised Deputy Mayor Anni Sinnemäki, who signed the declaration on behalf of the City of Helsinki.

In the declaration, the signatories commit to advancing:

“It is great that our city partners have joined Helsinki in conveying the message to the European stages that the significance and financing of urban policy must increase during the European Union’s next funding period”, rejoiced Sinnemäki.

More information
Link to the Declaration

75 per cent of Europeans live in cities and urban areas, and 70 per cent of the world population is expected to do so by 2050. Mitigation of and adaptation to climate change will need to be done first and foremost in urban areas. As urban and European challenges continue to be strongly connected, cities can test out new solutions and feed them into broader policy debates.

The Declaration contained the following:

Collaboration is essential
We believe in cooperation and exchange of information and knowledge between all stakeholders in the urban area: citizens, cities, metropolitan areas and regions and networks as well as cooperation with academia, the private sector, new start-up ecosystems, NGOs, EU Member States, the European Commission and its institutions. This is essential to stimulate growth, digitalisation, livability, and innovation to tackle economic, legal and social-challenges in European cities.

Funding needed
We welcome the broadening of funding instruments to the benefit of urban policies, such as the Urban Innovative Actions and the increased focus on unban areas in the new Horizon Europe program. Funding instruments that encourage cities, metropolitan areas and regions, research institutions and businesses to co-operate in the urban environment are necessary to make progress towards the United Nations’ sustainable Development Goals (SDGs). Cities and functional urban areas are vital platforms for enabling sustainable growth, welfare, healthy urban environments and justice for all local actors.

A more ambitious Urban Agenda Required
We believe that the Urban Agenda for the EU is a strong example of cooperation between different levels of government. We highlight the need for a more ambitious Urban Agenda in the future. Therefore, we call for stronger partnership between cities, metropolitan areas and EU leaders and collaboration on EU policies and financial tools that have an impact on the ability of cities to implement policies aimed at improving the livability of cities and the life of Europe’s citizenry.

Cities are platforms to implement SDGs
The Helsinki Impact Conference (HlC) challenges cities to act as platforms for all stakeholders in finding solutions for global challenges around economic prosperity, social balance and healthy environment. We endorse the fact that the EU is committed to implementing the SDGs in the European Union’s internal and external policies. We encourage cities to implement and monitor the SDGs locally, following the example of Helsinki as the second city in the world to report directly to the UN at the local level.

Systemic change is needed
Systemic change is needed to create lasting positive impacts for cities and societies. The European Union is only as strong as its cities and neighbourhoods. City leaders can lead the change by being open to fresh ideas and innovative partnerships. The HIC participant cities and their partners highlight the continuous need to ensure a systematic and ongoing dialogue between city and EU policy makers. Concretely, we commit to advancing:

1. Combating climate change
in a rapidly urbanising world, cities have a key role in solving the climate crisis and in reducing emissions. This can only be done by developing a new paradigm for urban energy ànd traffic systems, which ane some of the biggest emitters currently- Citieó and city regions are committed to finding climate friendly solutions together. We ask European and national leaders, as well as decision makers in the European Commission and Parliament, to further work with us on implementing the vision of a carbon-neutral Europe by 2050. This requires progressive policies for cleaner and fewer vehicles in cities, investment in public transport networks and scale up support for energy transition in urban areas.

2. Working towards a human centric internet and ethical use of technology
Cities are committed to working towards a human-centric digital transition respecting our common European values for a more inclusive and dynamic Europe. While cities improve the quality and availability of public services, we endorse that technology is used under the strict principles of accountability, transparency, citizens’ rights and safety to ensure the ethical use of technologies like artificial intelligence and citizens’ data. We call for European and national leaders, as well as decision makers in the European Commission and Parliament, to boost the digital transformation across the EU by supporting cities’ efforts to develop, test and scale up digital solutions contributing to high quality and resource efficient public services and city planning.

3. Improving urban environments through spatial planning
Cities are committed to contributing to local, regional and transnational spatial challenges by improving urban environments that enable healthier and more sustainable lifestyles and to foster equality in people’s everyday lives in the EU’ Knowledge-sharing and best-practice benchmarking form a good basis for driving forward systemic change in spatial planning and in the planning organisations. We call for European and national leaders, as well as decision makers in the European Commission and Parliament, to recognise city networks’ contribution to cohesion policy and territorial cohesion. We recommend a strong commitment to support cities and city regions in their holistic spatial planning actions, which are based on relevant spatial facts and analyses and on scenarios of the metropolitan level changes caused by warmer climate.

4. Enabling social equality and more inclusive cities
Cities are committed to continuous efforts to promote equality, access to education and access to labor markets and jobs for all citizens, including third country nationals. We call for European and national leaders, as well as decision makers in the European Commission and Parliament, to recognise the contribution of cities to the implementation of the European Pillar of Social Rights, supporting our efforts to build equal and inclusive societies that leave no one behind, ensuring our citizens have access to education, quality jobs and affordable housing. Solving the housing crisis in European cities needs a better legal framework for affordable housing in the EU.

5. Strengthening the role of cities as innovation platforms
Cities continue sharing information on how urban transformation and innovation strategies stimulate creativity and entrepreneurship. Cities are committed to strengthening their role as innovation platforms in collaboration with academia and local businesses. City regions can provide reliable spatial data and analyses as part of innovation platforms. We call for European and national leaders, as well as decision makers in the European Commission and Parliament, to support cities and city networks by providing funding and services to develop projects and innovative startups, and to enable the scaling up of the best innovations, results and growth companies.

The Finnish EU Presidency will take stock of the assessment of the Urban Agenda for the EU and facilitate discussion towards the revision of the Leipzig Charter. The Helsinki Impact Conference participant cities and their representative organisations will commit, in dialogue with EU institutions and national government representatives, to actively contribute to European policies for cities and urban areas.

Signatories
City of Stockholm
City of Helsinki
City of Tallinn

METREX and our hosts the Métropole de Lyon, together with supporters UrbaLyon and L’Institut Paris Region, met online 30 September to 2 October 2020